Jägala Waterfall is a widest natural waterfall in the lower course of the Jägala River Estonia, approximately 4 km before the river flows into the Gulf of Finland. The waterfall is approx. 8 metres in height and more than 50 metres in width. Jägala Falls is located near a small village Jägala Joa, 30 kilometers east of Tallinn, Estonian capital city. There is a car park just next to the waterfall, so access is extremely simple. To visiting the remarkable Jägala Waterfall in winter is a truly amazing nature experience. Frozen from January to March, it is definitely a peculiar sight to be seen.

You can walk under the waterfall, in an ice palace. When the mass water is frozen in cold weather becomes a glistening ice wall with large icicles. A tunnel surrounded in both sides by ice may be formed in between the ice hanging down from the edge of the waterfall and the wall of waterfall. It’d be interesting to know that in terms of fishery the lower course of the Jägala River from the waterfall to the river mouth is one of the most valuable ones in Estonia and large trout and salmon resources can be found here. In spring and summer (if it is not too dry summer) people go canoeing there. With low water lever you can walk on the top of the waterfall. And due to smaller waters, there is no opportunity to swim in the river, stand under the waterfall and let water massage your shoulders. The best time for visit could be a spring, when river is full of water. But in dry season it does not look impressive. Source: Charismatic Planet 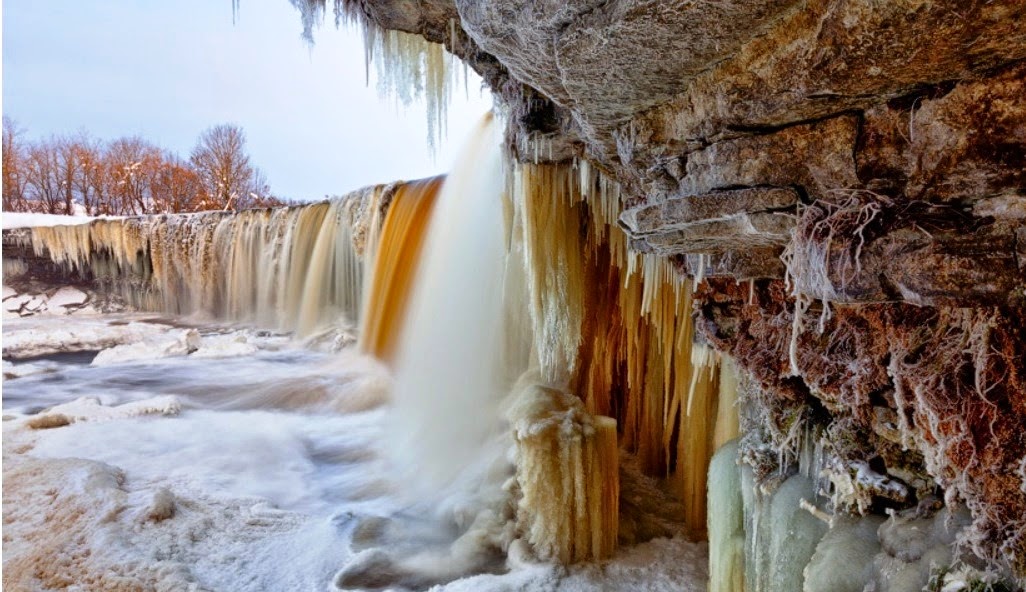 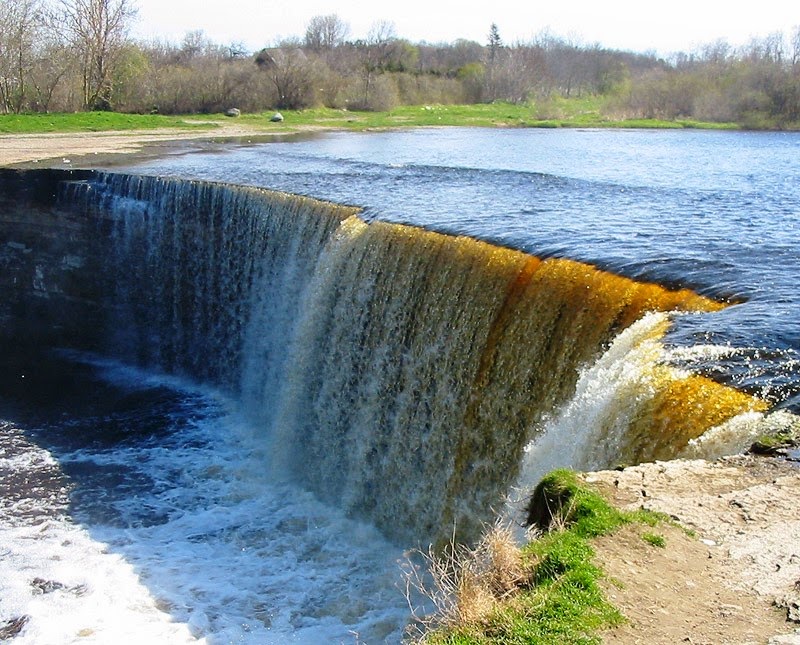 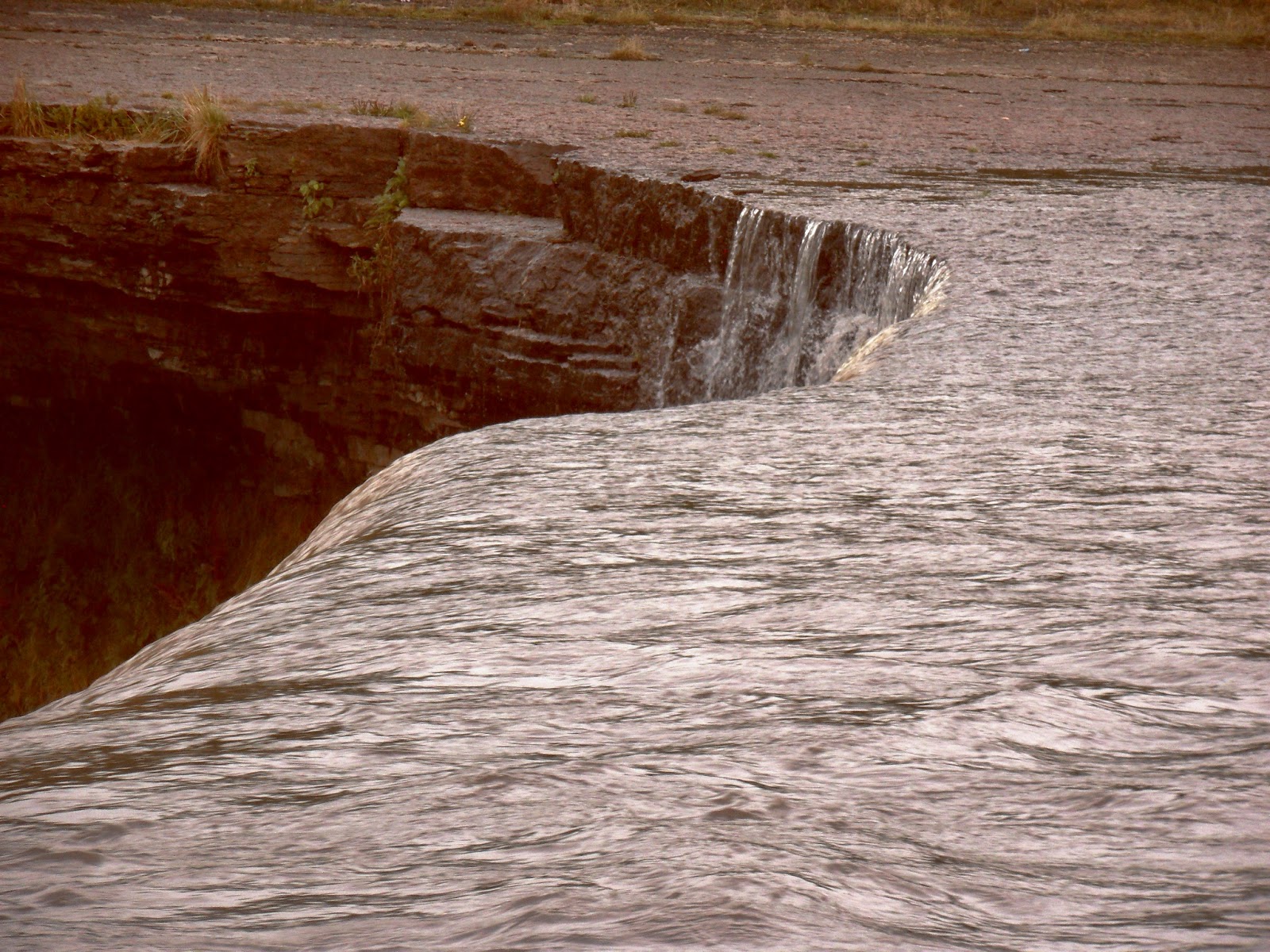 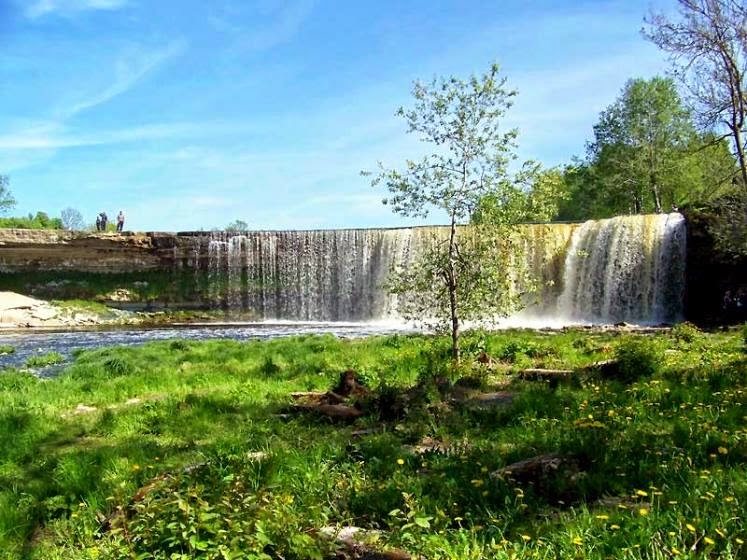 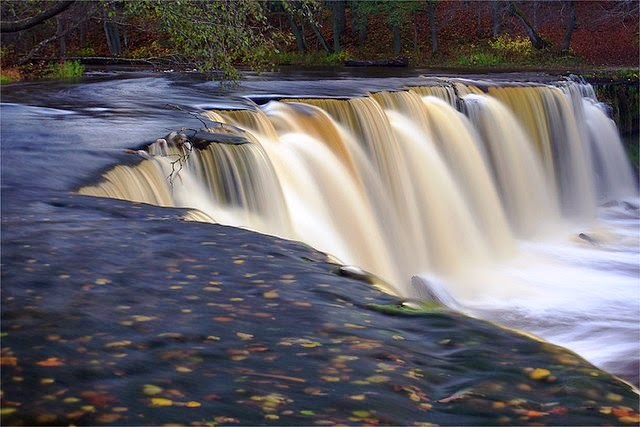 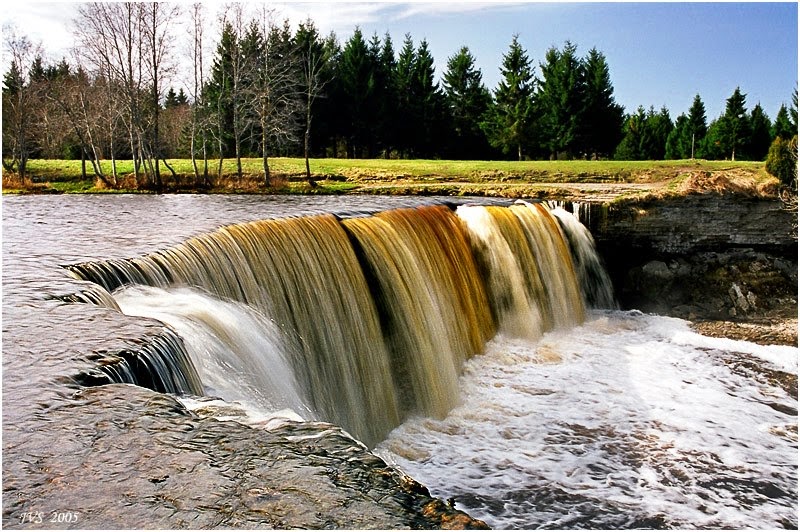 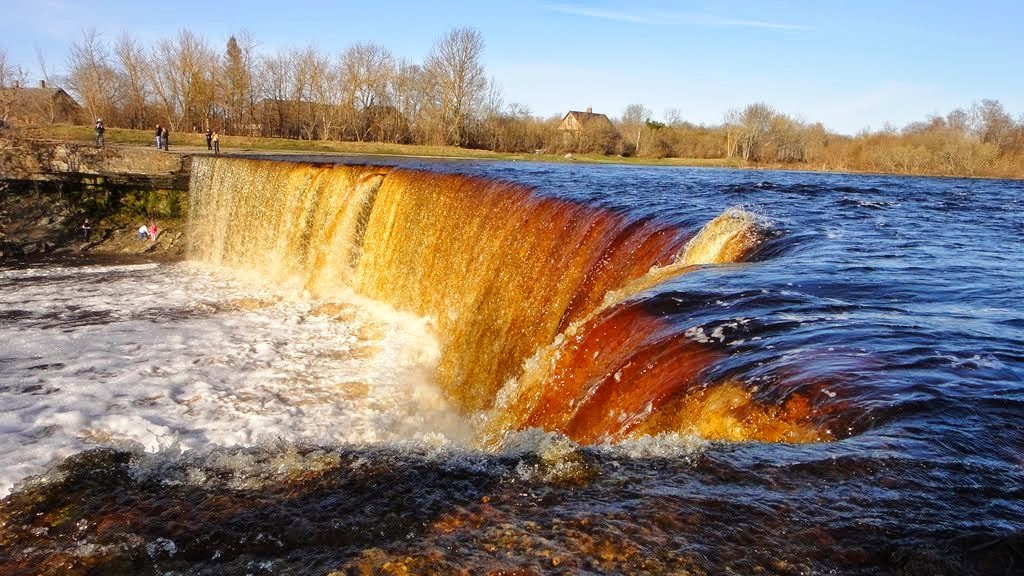 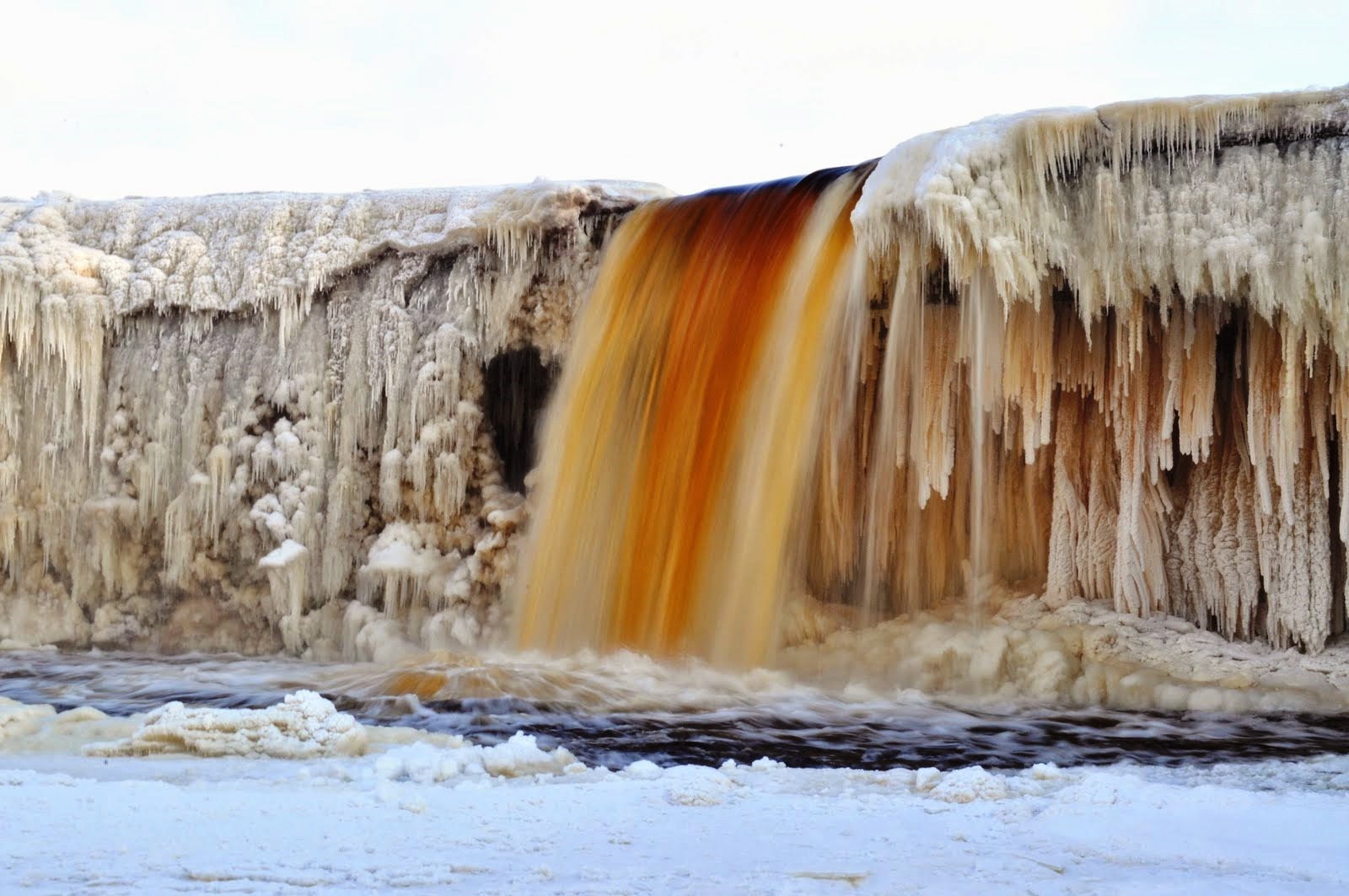 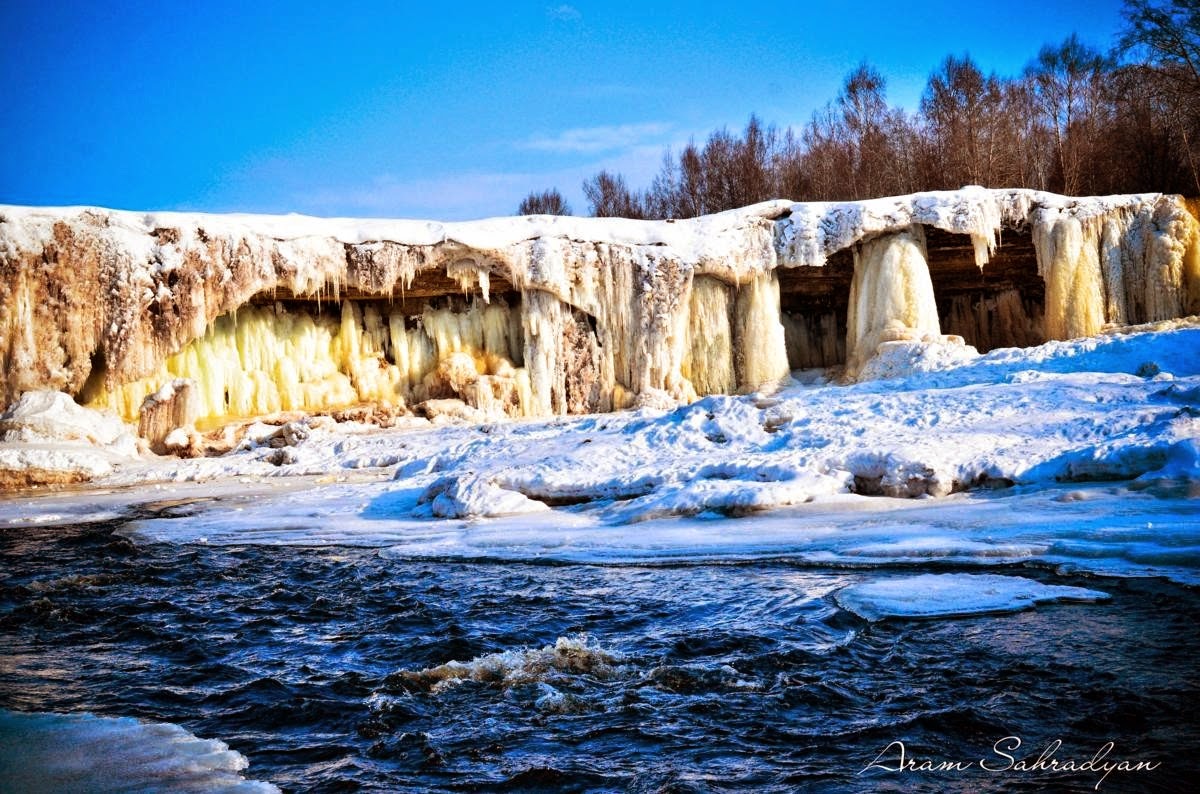 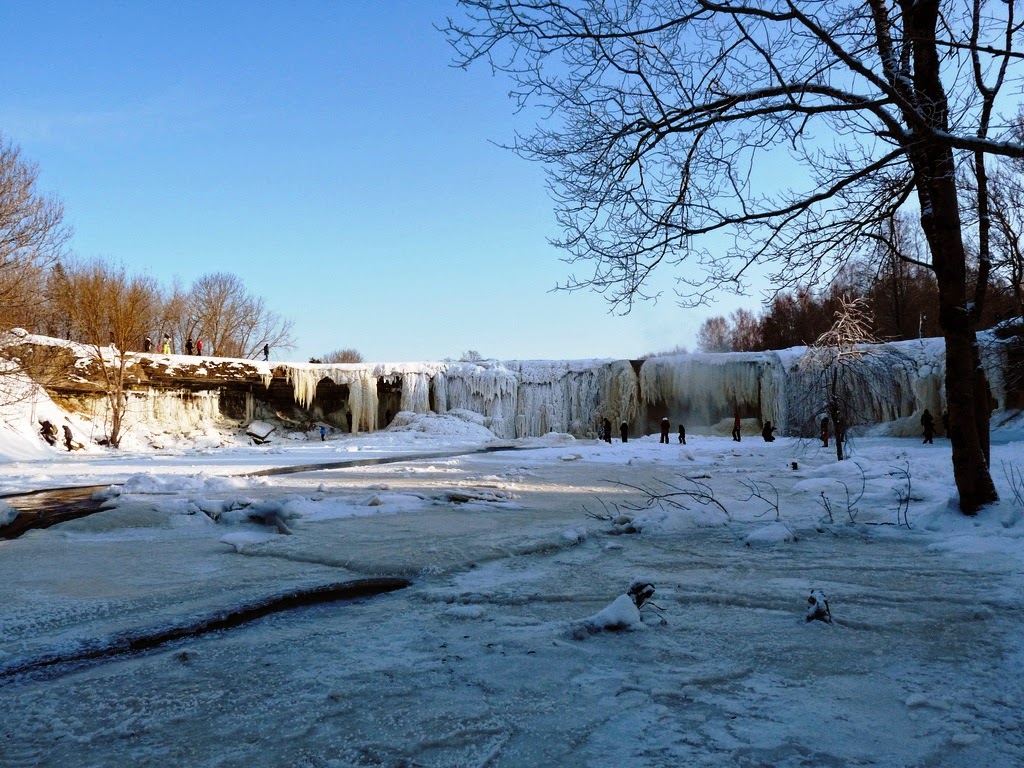 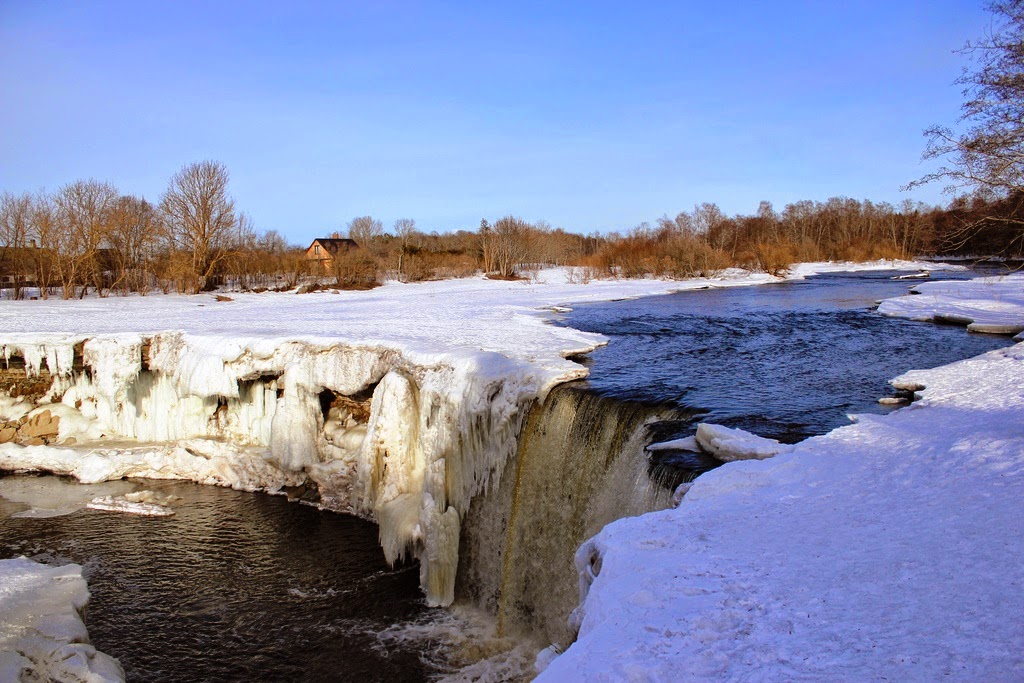 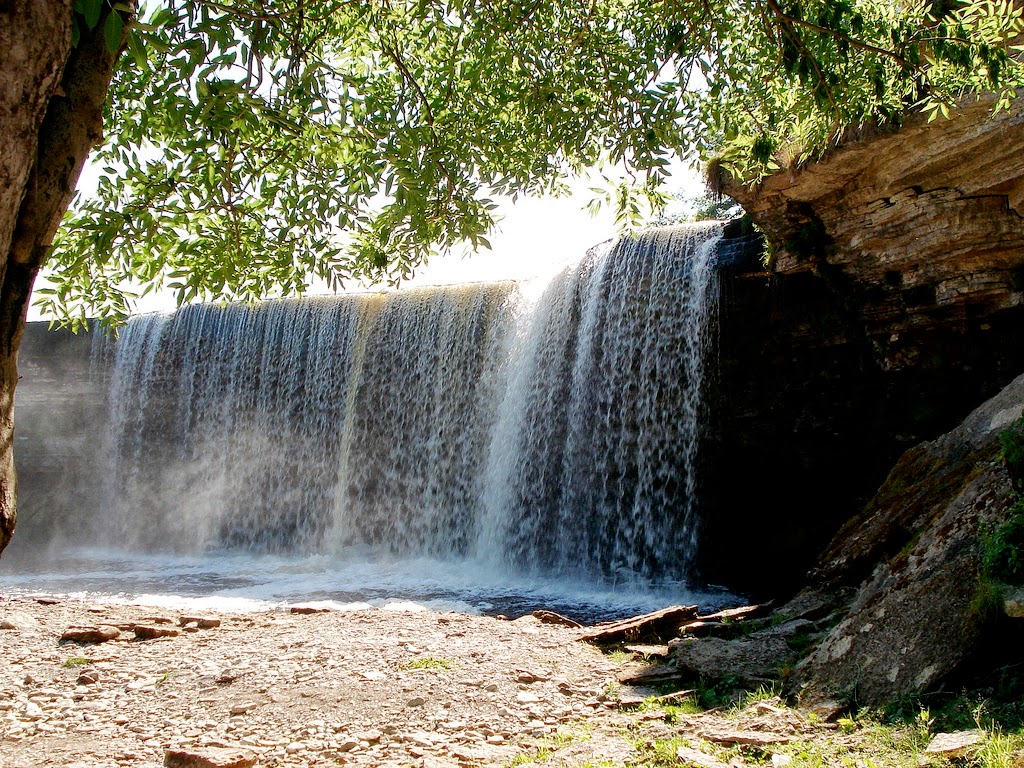 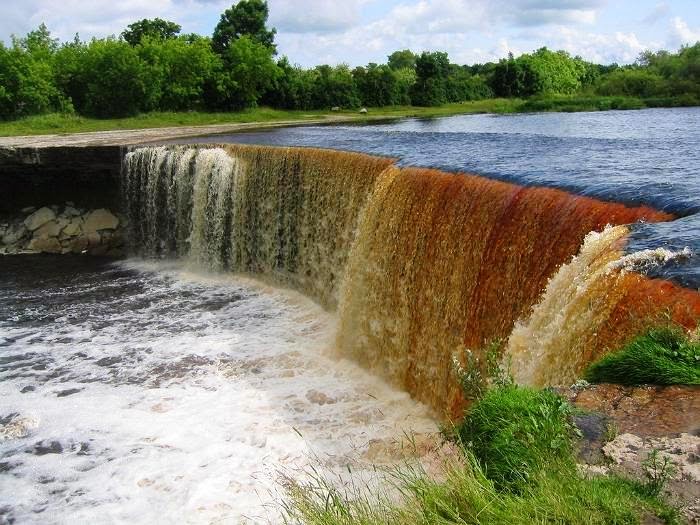 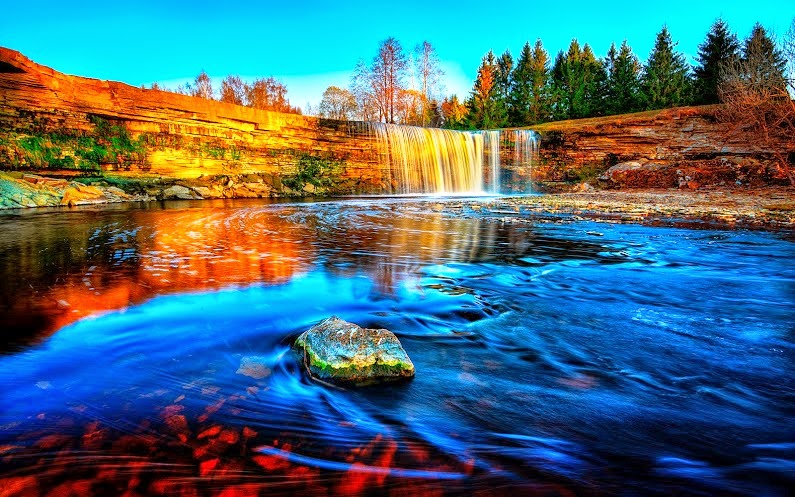 Email ThisBlogThis!Share to TwitterShare to FacebookShare to Pinterest
Labels: Estonia


The Kaali Meteorite Crater is situated in the village of Kaali on the Estonian island of Saaremaa, almost 18 kilometers from its capital Kuressaare. It is believed it was last gigantic meteorite to fall into a densely inhabited area, and the scar it left on the landscape expresses about the dreadful events which happened here during the Bronze Age.
Some 7,600 years ago, a huge rock, between 20 to 80 tons in mass, ripped through Earth’s atmosphere at a velocity in the middle of 10 to 20 km/s, with an an altitude of 5 to 10 kilometer, the meteorite broke up into countless pieces and fell in fragments. The biggest of them slammed into the earth releasing energy comparable to approximately 20 kilotons of TNT, or 25% more potent than the atomic bomb that leveled Hiroshima during the end of the World War II. The explosion removed about 81,000 cubic meters of dolomites and other rock, shaped a fireball 7 to 8 kilometers tall and incinerated forests within a 6 kilometers radius.
During that time, village was forested with a little human population and impact was less damaged. Perhaps casualties must have been several, but the exploding meteor left a whole of nine craters in an area which is now recognized as the Kaali Meteorite Crater Field. The main of these craters has a diameter of 110 meters and a depth of 22 meters. Other pieces of meteorite shaped smaller craters with diameters ranging from 12-40 meters and their relevant depths vary from one to four meters. All lie within a distance of one kilometer from the main crater.
These days Kaali Crater has a lake in it, mainly fed by ground water and precipitation, it is mainly depending on the time of year and this lake has a diameter of 30-60 meters and depth of 1-6 meters. The surrounding of Kaali crater are the remains of a huge stone wall 470 meters long, 2.5 meters thick and around 2 meters high, believed built during the early Iron Age (600B.C. to 100A.D.)  A massive number of domestic animal bones have been found inside the walled area, the newest dating to the 17th century, signifying that the lake was not only used as a watering hole but as a place for ritual sacrifices. Moreover; there are indication of a fortified settlement inhabited from the 5th to 7th century BC and a slight hoard of silver jewelry from the 3rd to 5th centuries AD.
The wall, the silver and the bones have led to gossip that century after the catastrophic explosion took place, the crater took on the role of a pagan worship site. The Estonians are recognized to have made animal offerings to certify good harvests, which persistent to be made in secret long after the Church forbade such pagan practices. Stories of the catastrophe and the lake appear prominently in Finnish mythology, particularly the national epic, Kalevala which give a very truthful description of fire falling from the sky that burned houses, fields, fens and humans. 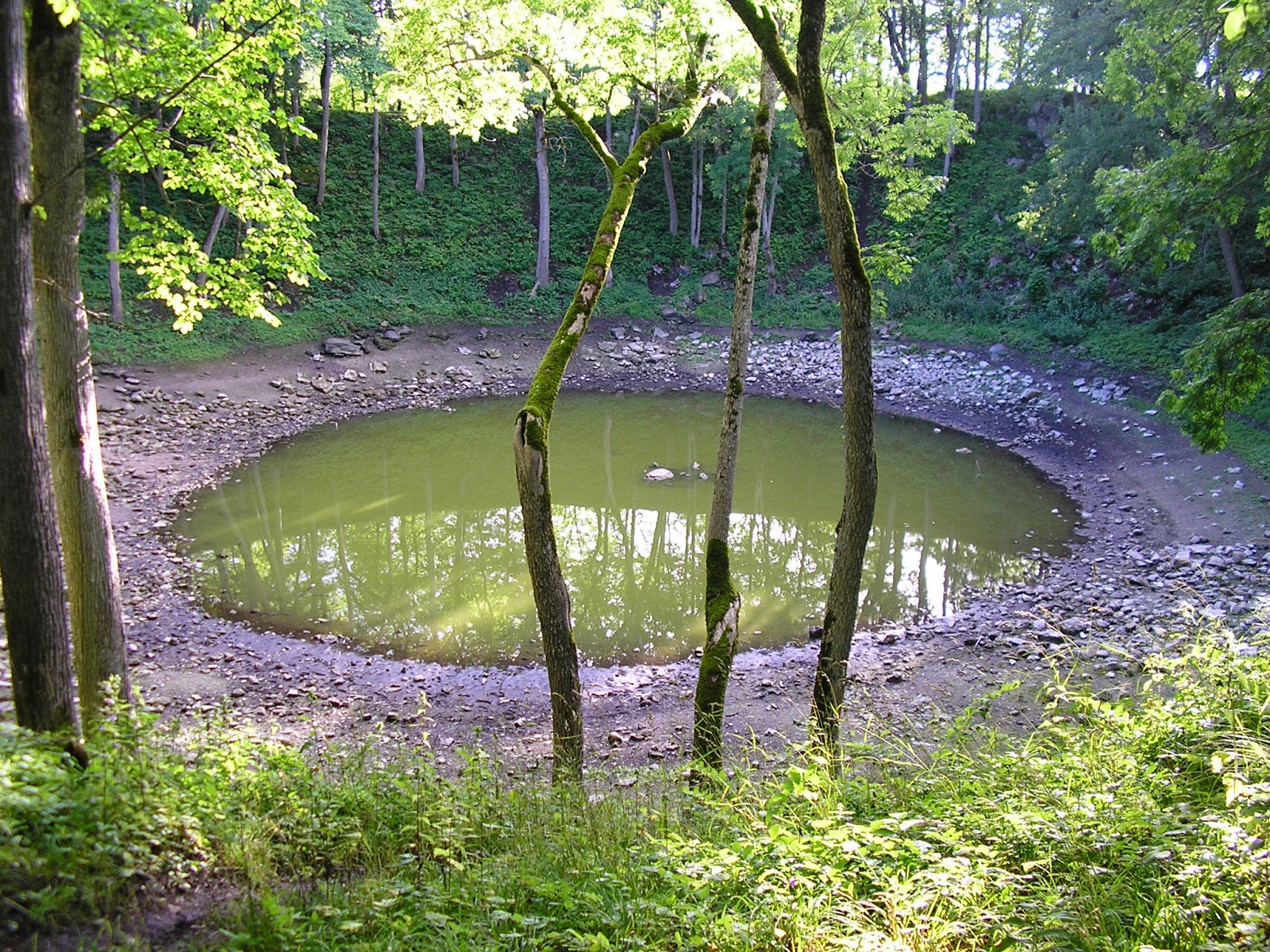 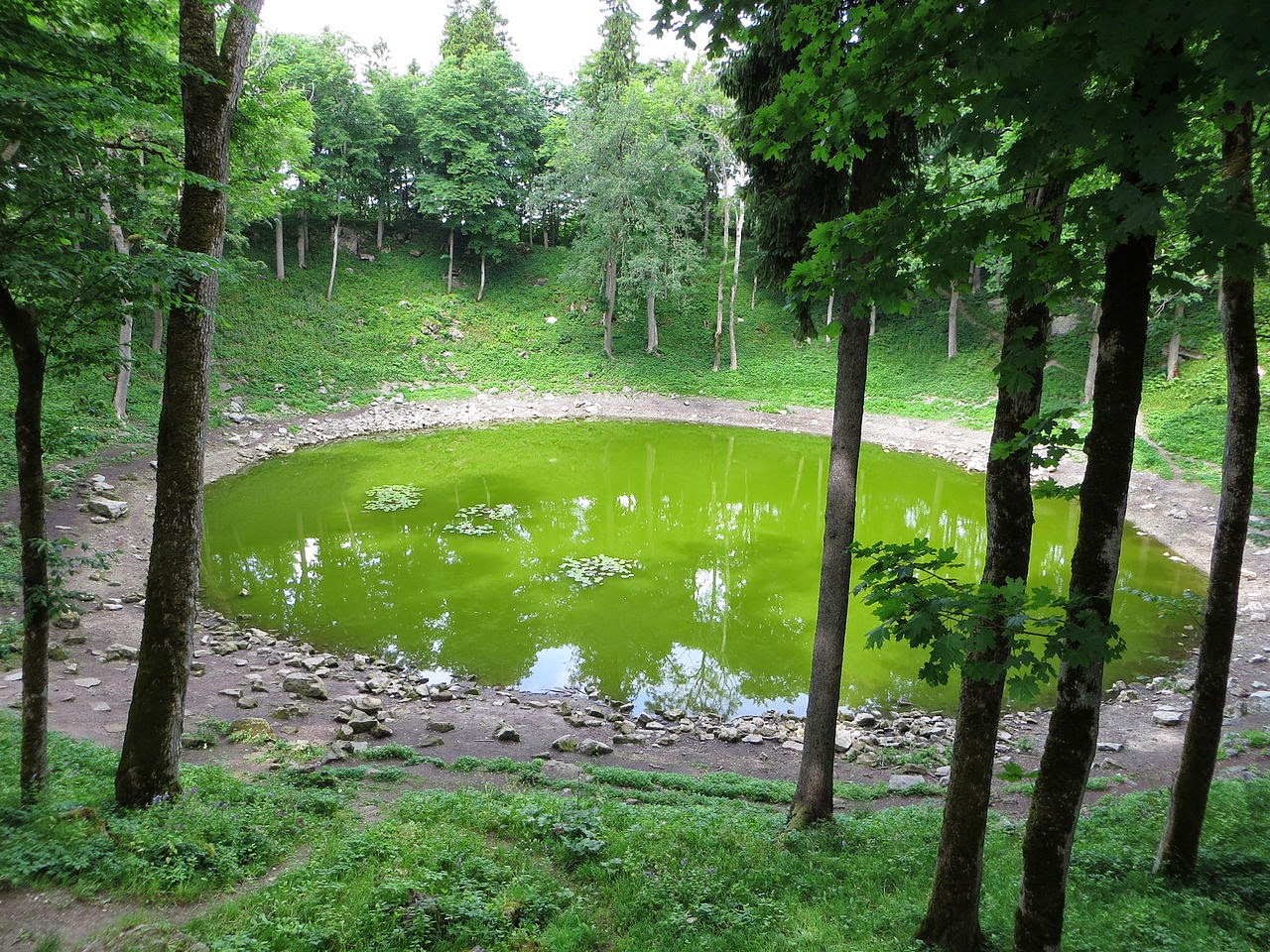 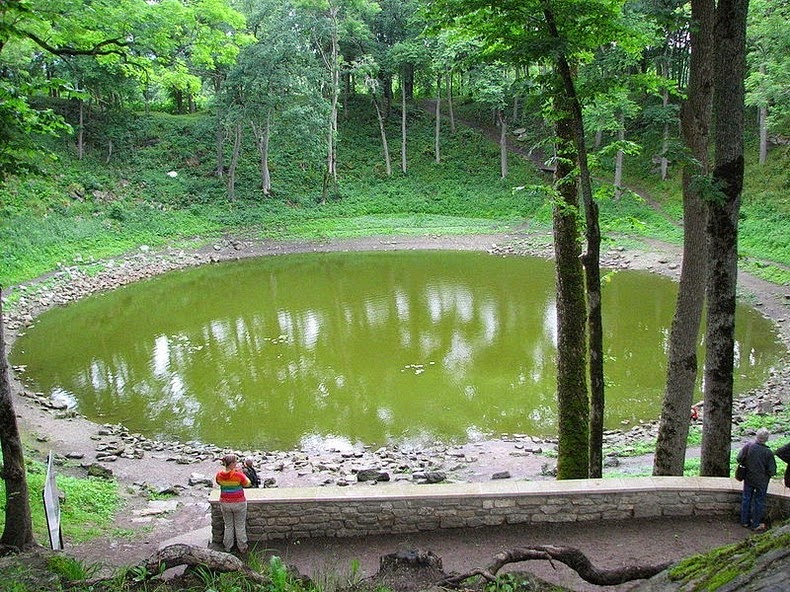 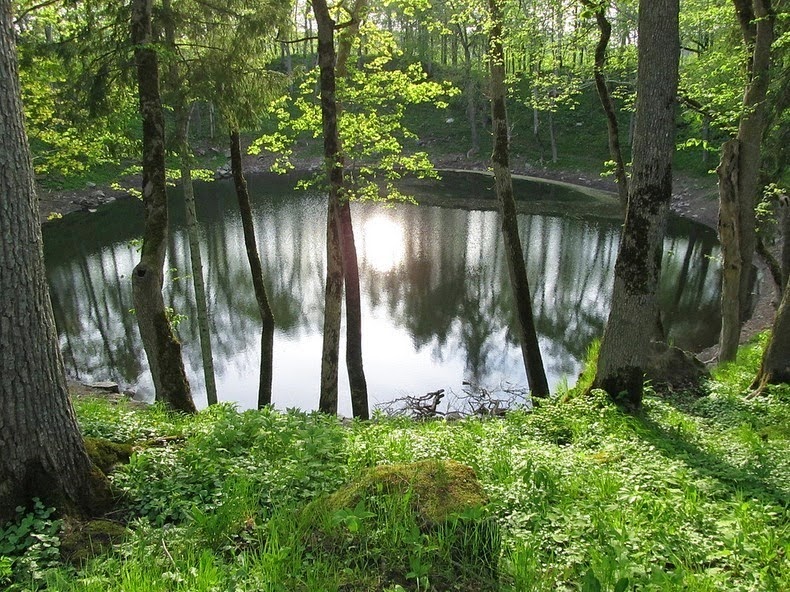 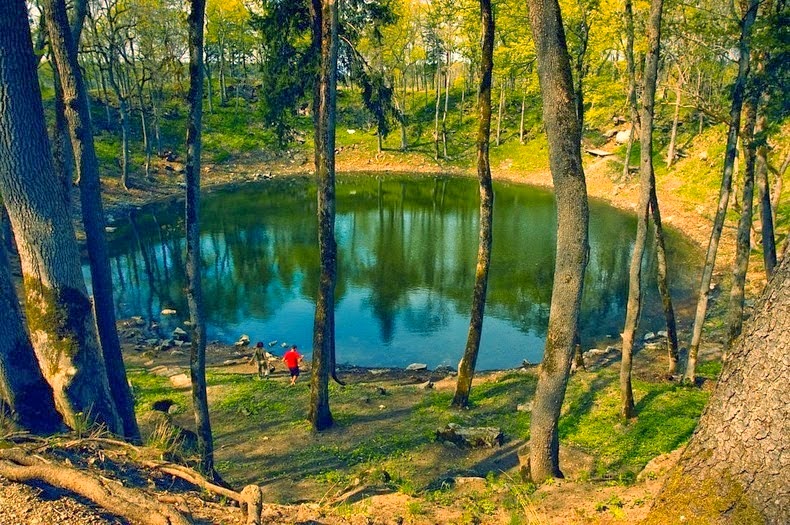 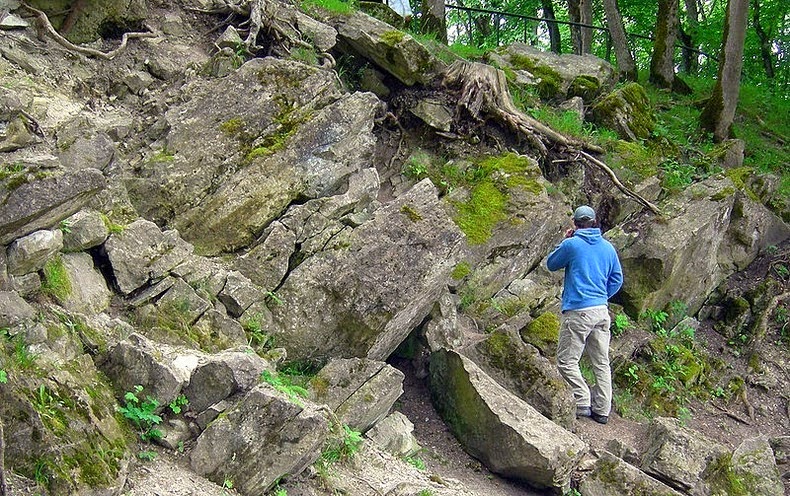 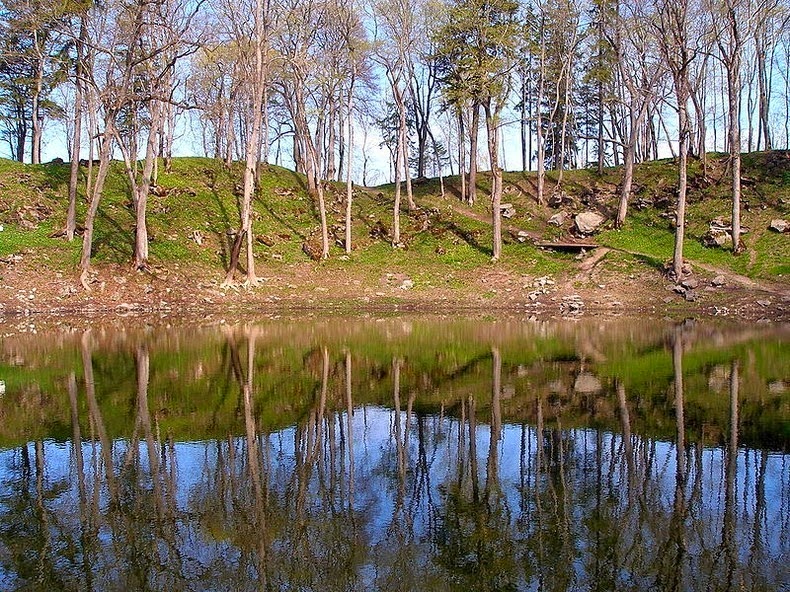 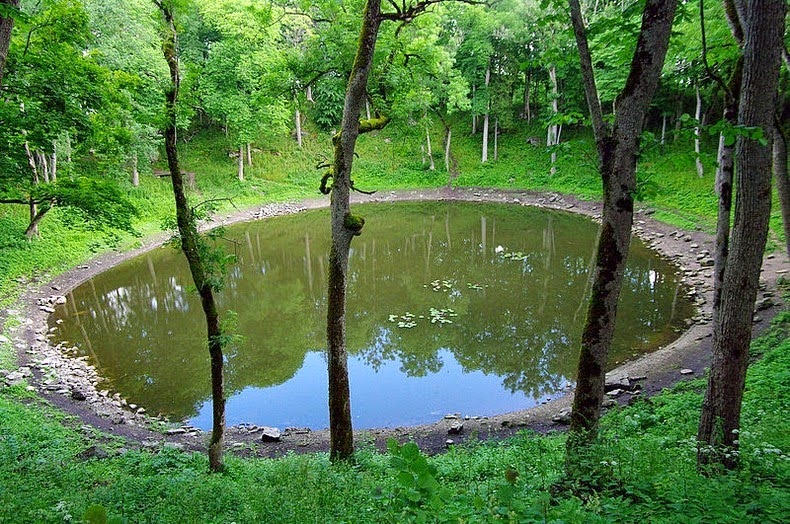